View our Updates + FAQS NEW     |     Health & Safety above all. View our Safety-First Commitment

Head Professional, Chris Mayotte, played the annual US Open Pro Am last Friday, September 6 benefiting the USTA Foundation. Mayotte explains his love for the USTA Foundation and the enthusiasm and amazing talent each athlete leaves on the court. During his professional career, Chris won 3 ATP titles. 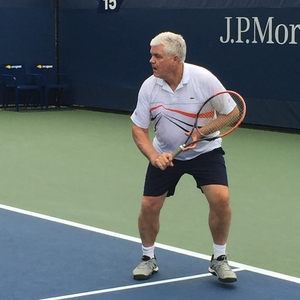 Q: Was it more fun for you reconnecting with the players you used to compete against or more fun for the amateurs who paid to play?

A: I played last Friday with a number of World Champions and Grand Slam winners. I never achieved this level of success. That being said, I did compete at that level and earlier rounds in singles and actually had success in double against some top level players. Putting that all together, it is an honor to be on the court with all these legends. And the amateurs, it is so fun to see their enthusiasm. They appear to enjoy themselves to the fullest amount, no matter who they are on the court with. The USTA Foundation is a great organization and this event, which is run by Bill Mountford our Senior Director of Racquets here at Chelsea Piers Connecticut, he does a great job creating an event that brings all that enthusiasm out from both the Legends and the Amateurs alike.

Q: Which legend did you enjoy seeing the most at this event?

A: Lindsey Davenport. I first saw Lindsey play in person in 1992 at the Miami Open. I was struck by her ball striking ability and she is still the same. She has beautiful balance and great strokes.

Q: Describe the US Open courts and the experience of playing at America’s Grand Slam.

A: True bounce with that New York City feel. And it’s exponentially more impressive today than it ever was when I played it. It is truly an inspiring event.

Q: What was your best-ever result in the US Open as a player?

A: I reached the 3rd round and lost to Ivan Lendl, who amazingly reached eight consecutive US Open finals. He was really tough.
(Note: no American man did better than 3rd round of singles at this year’s US Open)