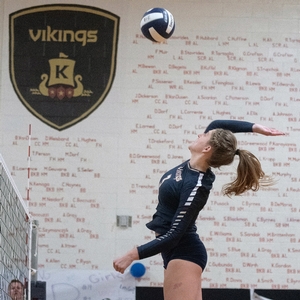 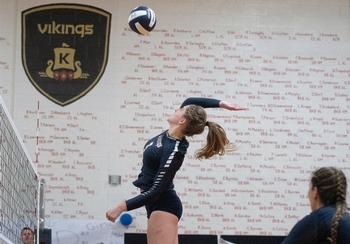 Building A Championship Tradition – One Practice and Match at a Time

King School Varsity Girls Volleyball Head Coach Tung Tran stood at the entrance to the Upper School Gym, on the North Stamford campus, prior to the start of another weekday practice and happily greeted the incoming student-athletes, while quickly setting the tone for the afternoon. “Get your work in - know what you need to work on and let’s get it done today,” Coach Tran echoed as players laced up their shoes, grabbed a ball, and hit the court.

Those words of wisdom have carried over from the practice floor to the film room, and have resulted in monumental victories along the way. King Varsity Girls Volleyball, already synonymous with winning for many years, has put together a tremendous stretch over the past five seasons, amassing an incredible 89-4 record. Looking back one more season, to 2013, will show the Vikings taking home an impressive five-straight Fairchester Athletic Association (FAA) Championships and winning four of the last five New England Prep School Athletic Council (NEPSAC) Class C Championships. This winning tradition and culture is a testimony to the long hours put in over the years training and developing on the King courts, and the work and time put in by the student-athletes outside of King at facilities like Chelsea Piers, where more than half of this year’s Varsity Team and many past and future Vikings train.

Now, with the volleyball season in full swing and the Vikings once again eyeing FAA and NEPSAC titles, the focus remains on building upon this culture of sustained success.

It is a consistent championship mentality Coach Tran and the Vikings embody as they rise to the occasion on the volleyball courts at King.  “I've learned over the years that once you get these girls to believe in their potential and abilities, their desire to succeed feeds into their own work ethic and discipline. I can say, in the years that we've had the greatest success, I've had to do the least teaching, and that's because once they all know and understand their roles on the floor, it's self-automated,” said Coach Tran, a teacher in the King Middle School who is now in his 20th year as the Head Varsity Volleyball Coach for the Vikings.

“Success breeds more success. It speaks volumes about how well the older girls have influenced the younger girls year in and year out. Every year we graduate a good percentage of our starting lineup, yet the rising upperclassmen always seems to know what they need to do, and this year is no different,” he adds.

Last season was one for the history books for King Varsity Girls Volleyball. After sweeping Sacred Heart Greenwich to capture their fifth-straight FAA title, the Vikings squad, featuring then Senior captains, and now college freshman, Alison Wheeler (Darien, Middlebury College), Kelly Conheeney (New Canaan, University of Notre Dame), and Stephanie Costabile (Stamford, Endicott College), rallied to take the final two sets on the road against MacDuffie School in Granby, Massachusetts, for the NEPSAC Class C Championship. That thrilling experience not only helped cement a tradition of excellence at King, but also made for a memorable experience for the players who carried the torch into this season.

“One thing I learned while winning back to back championships is to stay humble. It’s important to know as an athlete that nothing is handed to you; everything achieved needs to be worked for,” explained Senior Christine Nelli (Riverside, CT), who with fellow team captains Ava Robinowitz (Greenwich, CT) and Anne Michalski (Darien, CT) are leading King to hard-hitting victories this Fall in the FAA. “The blood, sweat, and tears we put into the season led us to be champions from our hard work and humility. We as a team were never handed the win, but we all worked for it together as a unit.”

That solidarity and pride is something that’s carried over along with the victories and has made an instant impact on the younger players on the team -- one big win and tough practice at a time.  “We've been told many times by Coach Tran, ‘what we do in practice shows up in the game.’  After a tough match, the team gathers around the smart board in King’s Middle School to watch videos of the game. Frame by frame, Coach analyzes each aspect of our game and explains what we needed to do to become better, which we all would then work on in practice. That focus and work ethic not only makes Coach Tran stand out, but our upperclassman and team as well,” said Freshman setter, Norah Shattan (New Canaan, CT). “Being part of this tradition as a freshman and last year as a Grade 8 student at King and with Coach Tran has been an amazing opportunity. Volleyball is a team sport and the fact that I can contribute to my team in any way makes all the work and sprints at practice worthwhile.”

Student-athletes at King, including the Girls Volleyball players, also take part in leadership and character development workshops and seminars, helping to cultivate their leadership, communication, and goal-setting skills, while also building on the core values of sportsmanship, citizenship, teamwork, winning and losing with class, commitment, perseverance, respect, and hard work. The lessons have paid off for the Vikings, with many of the volleyball athletes taking on significant leadership roles in other areas of school, and in their own communities, and all of the players proving to be tremendous role models for the younger generation of students coming up behind them as well as outstanding ambassadors for King, King athletics, and the King Girls Varsity Volleyball program. From hoisting trophies, to raising banners, and watching a group of individual players come together to form an unbreakable bond, a championship mentality has been developed to go along with the strong culture and winning tradition at King. “My ongoing message to them is: To have the success that we've had, it doesn't come easily,” added Coach Tran. “They have to be dedicated and committed. With the commitment comes hard work.”

To follow King School Varsity Girls Volleyball this fall as the team moves into postseason play poised to once again make deep runs in the FAA and NEPSAC tournaments, please visit the King Athletics website for seeding and match schedule information. Match results and athlete/team information and updates can also be found on Twitter @kingschoolct.org and Instagram at kingschoolct_athletics.