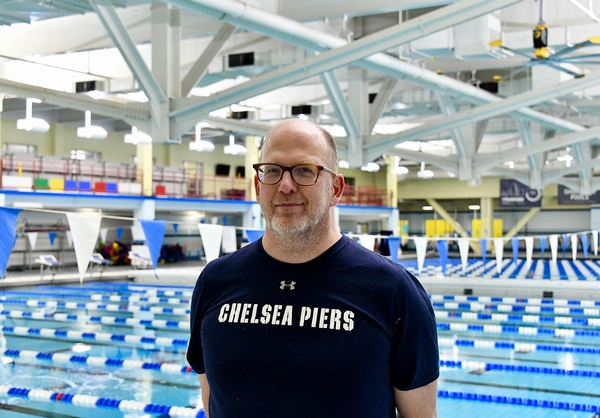 Aaron completed his MA in Education in 1994 and began his career as a middle school teacher and swim coach. His coaching career started as an age group coach at the Flushing Y, where Aaron helped contribute to seven of the program’s 30 consecutive state championships. In 2001, Aaron moved to Westchester County, where he coached senior swimmers at the Rye YMCA and Mamaroneck HS. From 2007 to 2017, Aaron was Badger Swim Club’s Senior Team assistant coach. At Badger, he had the pleasure of working with dozens of Olympic Trial, National, and Junior National Team qualifiers.

2017 – 2021 Aaron was named the Head Senior Team coach of the Greenwich Marlins, where in just four years, he coached champions from Sectionals to YMCA Nationals. He proudly produced at least one Junior National qualifier in each event in those four years. He also coached numerous Junior National, US Open, and National Championship qualifiers.

Aaron has been a teacher at Brunswick School in Greenwich, CT, since 2014, where he teaches in the Mathematics Department and coaches swimming. His swimmers have produced close to 40 All-American swims over the past five years and broke three New England and two National Records. His teams have consistently been considered in the top 25 nationally. Aaron’s love of being in the classroom and the pool deck are key components in his ability to help swimmers who want to swim in college find the right program.